Has anyone experiences postcode errors? UK postcodes now identifying addresses in other counties and routes cannot be planned.

If you’re a free user, you’ve probably hit the free usage limit of Google’s free address finding service, as we’ve announced in this other topic.

Well, I’m a paid up member, and use Route XL every day. At least twice a week one or two correct UK postcodes appear somewhere in the Midlands instead of the Southern counties. I have had to integrate an additional step of checking and re-positioning these addresses into my process.

If you’ve upgraded, make sure to set Options > Geocoding > Preferred service to “Google”. Generally that will give the best geocoding, translating addresses to map coordinates.

Additionally, if you use partial addresses only, it may help to set Options > Geocoding > Address suffix to your region and country, e.g. “Southern England, United Kingdom”. This will be added to each address before geocoding.

Also, it may help to zoom in to your region and set Options > Geocoding > Search area to “S”. This will skip results further away from the map center.

If nothing helps, share some examples here or email info@routexl.com so we can run some tests.

That’s really helpful information, thank you. I have already tried Google as the geocoding service, but I reverted to Mapbox because with Google several destinations were placed where there were no roads or buildings, and the map itself lacked both clarity and detail (see comparative images attached).

I have already set England as the address suffix, which prevented Dorset postcodes being located in the Scottish Highlands. Now I know Southern England is an option I will add that too, especially as I only have time to enter postcodes.

I had the zoom level set to “M” because I don’t know the extent of the different zoom settings. Exactly how big is the area covered by each of the zoom settings?

I have a separate question about how to plan a route manually in the event that RouteXL is unable to find a route, but I will start a different thread for that query. 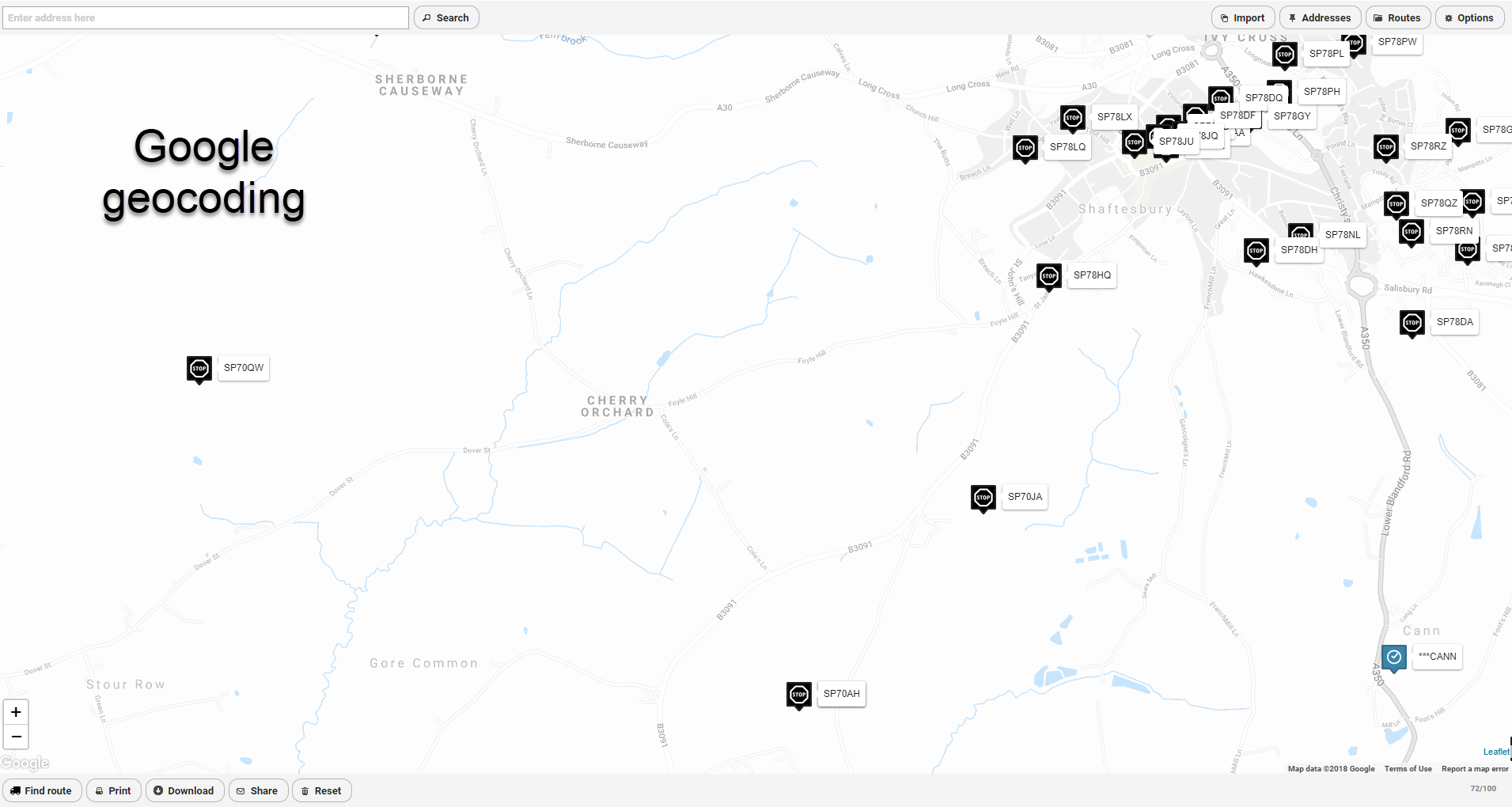 If you get better results with Mapbox, that’s the best choice for you. You can also add Dorset to the address suffix if all your destinations are there.

Thank you. I’ll stick with Mapbox as long as it continues to work. I am having occasional problems finding optimal routes, but presumably this is a distinct process from geocoding and would not be the fault of Mapbox/Google once the destinations are found.

How do I add Multiple counties, e.g. Dorset and Wiltshire?