Route exported to Google Maps does not list addresses

Most often I import coordinates list into RouteXL, generate a nice route and after than I use Download/Google Maps to get the route usable in Google Maps. Until today, after getting the route into Maps, each of the given coordinates gave the closest address - street and number.

Today, the list that Maps produce has only the coordinates and no address text (see attachment). It is kind of a nuisance and so I’d like to ask, is it some problem or change that Google is responsible for? Or some of the Geocoding limits have been reached by me? I would really like to return to the previous style with the coords being converted to nearby addresses.

Regards and thanks,
Greg 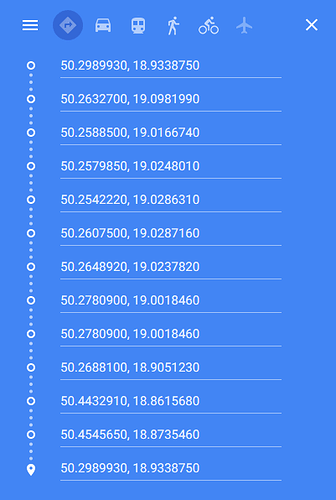 Confirmed, we see the same behaviour. It seems Google Maps has changed something in their system. We’ll investigate and search for a solution, but we can not control the choices that Google makes for their system.

I do understand it, of course. I just wanted to confirm whether I can influence it in any way or not really. Thanks anyways. Hopefully some solution will be possible. In the meantime I will need to find some workaround. That’s what Google got us used to - changes without notice

The same issue was reported on Google Maps community forum:

It may help to upvote.

hello.
I don’t know if it is the same issue, but when I export my adresses into maps, some of them seem to “lose” the street name in the list.
Cfr pictures.
Any idea why ?
Thanks !

That’s related indeed. When you export to Google Maps, your input is not send as such, but the map coordinates of each stop. That’s the only way we can get the exact same location of each stop on the map. How those coordinates are converted back to addresses is a choice by Google that we can not control.